From the 70's to the present

With Pat Flannery elected the new Chairman, 1971 was even busier than the previous year. The Association were making plans to erect a building in Ballindine and requested Mr. Jerry McGarry, Architect, Ballyhaunis, to draw up plans. Five and a half acres adjoining the original site were purchased. The directors decided to publish a quarterly magazine which was be called “Steering Wheel”; Martin Forde was again chosen to be editor. The magazine has had many distinguished contributors over the years; John B. Keane, Maeve Binchy, Vincent McDonnell, Donal K. Boyle, Terry Prone, Christy Brown, Paddy Flannery, Dr Eamon Casey, Fr. Michael Golden, Fr. Robert Nash to name but a few.

On January 4th 1972 the Directors decided to appoint Martin Donoghue as General Secretary of the Association, a position he held until his death. Dr Phelim Donnelly MD., FRCPE (Galway) became Medical Adviser. Dr Donnelly was a tremendous asset to the association, not only for his valuable medical advice but also for his efforts on behalf of the association to procure financial aid and for the radio appeals he made on its behalf. He was also instrumental in getting a delegation from the Association address the Medical Union of Ireland Conference on the Physically Disabled which was held in Wexford in 1974.

Fund-raising continued throughout Ireland, spearheaded by Pat Grogan. Kevin Regan was instrumental in the setting up of a fund-raising committee in America. The New York Committee did Trojan work in those uncertain early years with delegations from Ballindine conducting very successful fund-raising tours. Brian Crummy from Sligo who had been very active in the Association, and who was later to become Chairman, was co-opted on to the Board of Directors and led a delegation to the Department of Health in an effort to obtain a grant for the building project. This was not forthcoming and it was decided to complete the project in two stages.

The work on behalf of the disabled continued. Branches were set up in Galway, Sligo, Cork and Dublin. Sheila O’Donoghue was appointed to take charge of the Cork office, a position she holds to this day, where she serves with a diligence above and beyond the call of duty. Stage One of the building was officially opened and blessed by his Grace, Most Rev. Dr. Cunnane DD., Archbishop of Tuam on Sunday 22nd August 1976.

Campaigning for disabled rights, sometimes on a militant basis continued. A “T.V. Campaign” in which a majority of members refused to pay their licences, and quite a number being brought before the courts, proved to be a source of some controversy, however the budget of 1977 proved to be a source of great satisfaction with the introduction of the free T.V. licence.

At the Ballindine Headquarters work continued to create a learning environment in which the potential of disabled people would be enhanced, an environment that would be educational, practical, informative, innovative, recreational and social. Now established in Ballindine were administrative offices, canteen and residential accommodation. With the founding of Ability Enterprises in 1980 modern workshops were installed. Training was provided in electric motor rewinding and repairs. Among the customers were some of the largest firms in Mayo and neighbouring counties, including Halal, Thermo King, Western Pride and Roadstone. Metal work, wood turning, crafts, and soft toy making was taught and factory shops established. Also manufactured and sold were items of jewellery, handmade rugs, hand painted pictures, basketry, leather goods, hand painted tablecloths, cabinets, coffee tables and standard lamps. A range of disabled aids and appliances were manufactured and sold. The advisory group of the DDAI felt that the study of computer technology should form an integral part of an education programme and a training centre was set up. University College Galway and the Mayo Education Committee came on board and agreed to use the centre as a location for some of their extra mural courses. Ability Enterprises Telework Service Centre was established.

Alongside all of this the driving school continued to go from strength to strength. The fight on behalf of the disabled continued; indeed in 1988 it had to be intensified when the Disabled Drivers’ Scheme was under threat. Martin Donoghue and Brian Crummy were on the road constantly, fighting to retain the scheme introduced by C. J. Haughey in 1968. Martin was like a man inspired, re-invigorated by this latest battle. The campaign culminated in a protest outside the Dail in April 1988, and victory. Brian was to go on to serve as Chairman of the Disabled Drivers Association for 20 years. His background in the public service as a health board official and prominent trade unionist stood him in good stead and he proved to be a safe pair of hands over the years. It seemed as if Martin felt he had achieved as much as he could in his lifetime and that it was time to pass the mantle on to someone else.

End of An Era

The deaths of Ann Donoghue in 1987 and Martin two years later left a void within the Association. They are buried in the grounds of St. Joseph’s Church, Ballindine, in close proximity to the DDAI complex which they sacrificed so much to establish. The Donoghue Memorial Bursary was established in their memory to help disabled students finance third level education. 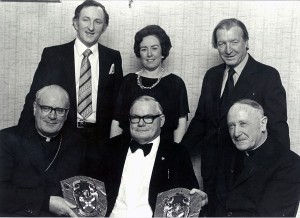 Mr. Martin Donoghue is shown receiving the “Mayoman of the Year” award in 1980. Mr. Justice Hamilton in his citation described him as “the most unique Irishman of our time.

Derek Farrell began work in the Dublin office of the DDAI in 1988. A year later following the death of Martin Donoghue he was appointed General Secretary of the organisation. From the beginning Derek’s innovative thinking was evident. His educational background(Degree in Mechanical Engineering, Masters in Business Administration and Diploma in Adult Education) soon manifested itself. 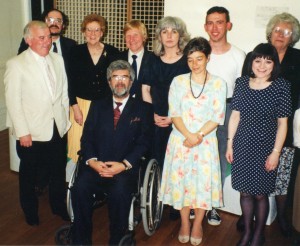 Derek brought an international dimension to the Association (in 1990 the Disabled Drivers Association became full members of Mobility International(MI), headquartered in Brussels). He looked towards Europe, sourced European Social Funding and made the best possible use of these new resources in developing courses and acquiring equipment which benefited the DDAI and Ability Enterprises. Through Derek the Association hosted a number of MI international projects, Youth Worker Programmes, Information Technology Workshops and Youth Committee and Women’s Group Meetings at the Disabled Drivers Centre in Ballindine. Our Irish students were similarly empowered by attending exchange courses and visits to EU countries. He and the Association were actively involved in Cross Border initiatives promoting peace and reconciliation.

As President of Mobility International he was active in developing MI programmes under the Phare and TACIS EU Initiatives and conducted projects in Hungry, Romania and Russia as well as programmes within the Horizon and Leonardo initiatives and carried out assignments for the United Nations in Asia. In the late 1990′s he was responsible for a series of training programmes for emerging voluntary organisations in Russia and several of the Republics. He was also elected the first President of the Federation of European Motorists with Disabilities (FEMD).

During this time the Association took part in a number of EU research projects including CONSENSUS which developed standards for assessment of people with disabilities in relation to adaptations for driving.

Derek never missed an opportunity to promote The Disabled Drivers Association and Ability Enterprises at home and abroad.

In 1995 Pat Grogan, co-founder of the Disabled Drivers Association died, Pat had been appointed honorary President of the DDAI on his retirement from the Board.

At the end of 1997 the Association was accredited by the Department of the Environment with the issue of the new European Disabled Person’s Parking Cards and this led to the establishment of a new department at the Ballindine centre.

December 2000 saw the establishment by the DDAI of the first Shopmobility unit in Ireland, at the Liffey Valley Shopping Centre. This service has to-date been extended to Dundrum Town Centre, Mahon Point Centre, Cork and the Whitewater Centre in Newbridge.

The centre in Ballindine continued to be at the forefront of IT training in the region and beyond, with courses run in conjunction with DCU., MAYO VEC., U.C.G.

The driving tuition centre received a boost in 2001, when a static assessment unit was acquired. This was the first of its kind in the country and it has proved to be a valuable addition to the driving school.

Paddy Flannery died in May 2004; one of the original founders, he served as a Director for several years and was a loyal worker on behalf of the Association who contributed greatly over the years. He was a multitalented man, being a writer, poet, musician and raconteur.

With the retirement of Derek Farrell in 2006, Kenneth Fox became the new Chief Executive Officer of the DDAI. In a rapidly changing world, where the environment for people with disabilities is changing, in many ways for the better, the Association continues to respond to the needs of its members and looks forward to providing a voice and support for people with disabilities into a fifth decade.

We are continuing to process the EU Parking Card for both renewals and new applicants. Our phone lines are open from 10am - 1pm & 2pm - 4:30pm Monday - Friday.

Due to the current Government guidelines our offices in Ballindine will be closed to the public until further notice.

We use cookies on our website. Some of them are essential for the operation of the site, while others help us to improve this site and the user experience (tracking cookies). You can decide for yourself whether you want to allow cookies or not. Please note that if you reject them, you may not be able to use all the functionalities of the site.